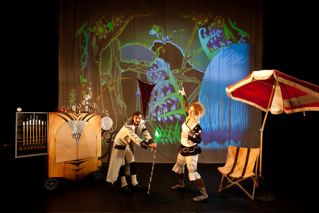 Told in classic story -book fashion, but with generous lashings of pantomime, clown, slapstick, character puppetry and digital animation, the performers Bryony Geeves and Kai Raisbeck, as brother and sister Wilbur and Wilma, tell this complex but rollicking tale with great vigor. Punctuated by moments of heightened physical theatre and delightful song the show is visually complex, with the feel of an old world nursery rhyme come-alive.

Sally Saber wanted to be like a tiger; sharp and unafraid. But there was never anything to fear. Her parents made sure Sally was always safe. Until one night Sally found she was the only one awake in her house. Everything familiar suddenly turned strange.

This would be no ordinary night.

Thrust into a fantastical adventure, Sally’s story is narrated by Wilma and Wilbur, a wandering sister and brother act that could be straight from the streets of Dickens London. Sally’s journey is populated with unforgettable characters and challenges of courage and ingenuity, as she finds the strength within to find her way back home.

Poetic, magical and hilarious, Sleeping Horses Lie is for anyone who’s ever dreamed of charging off on horseback for the adventure of their lives, returning home, the same, but different.

“The charmingly simple set and stylish vaudevillian costume in sepia tones are a treat, with the inside of a coat becoming a screen for animation, and the matching tiger striped “cabinet of curiosities” revealing musical instruments, animated objects and a puppet stage.”
Gai Anderson, Write Response

Terrapin acknowledges the assistance of PlayWriting Australia for this production.

The international tour is supported by the Australian Government through the Australia Council for the Arts, its arts funding and advisory body.